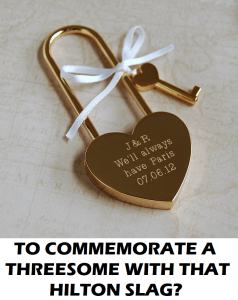 What the fuck is a love lock and why are they being cunted?

Well for the uninitiated miserable and heartless old bastards of IsAC, they are a padlock that can be fixed to a bridge or a gate or some other prominent public monument to symbolise a pair of sweethearts unbreakable love, with the key often thrown away into a river.

There are apparently hundreds of these places all over the world from Paris to Las Vegas to Dingo’s Arsehole, outback Australia. Most look a fucking eyesore, in some cases causing structural damage , health and safety issues or just taking away the architectural brilliance of something that was built by master craftsmen hundreds of years ago by adding a load of rusty locks that belong in Steptoe’s scrap yard.

Some places are embracing it of course, hoping to turn it into a tourist attraction which begs the question just how shit is the rest of the town? What will be next then, St Pauls graffitied with “Daz fingured Debs ere”.

And supported by: Cuntfinder General

I first encountered these, during a cultural (sni.gger) weekend in Liverpool. (Stop laughing at the back!😉).