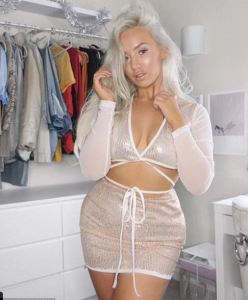 Who? You might ask. Well let me fill you in.

Three years ago this airhead tried to blag a free stay at a Dublin hotel by describing herself as a “social media influencer” and promising to promote the place on her YouTube channel.

Simply put, she’s just a deluded fuckwit who makes shitty videos, for other deluded fuckwits, about how gorgeous she is, when the truth is she looks like anyone in those hords of plastic slappers who hang around in overpriced bars and nightclubs, taking it up the arse from lower league footballers and z-list celebrities in the gents’ toilets.

The hotel owner told her, in no uncertain terms, to fuck off, and showed her up for the freeloading parasite she clearly is. Then, as appears to be the norm these days for young women with a sense of entitlement who don’t get what they want, she subsequently posted another video, turning on the waterworks and complaining about bullying from people who found her arrogance downright offensive.

This week, she’s found herself in the news again, but not for the reason she could have hoped for. Her fellow millennial snowflakes have been unsubscribing in their droves after unearthing racist tweets from her.

As the old saying goes : it’s better to let people think you’re stupid than say something and prove them right!! Or should it be “live by the sword, die by the sword”? Anyway, maybe now she’ll have to look for a real job.

Nominated by: Cunt Me In

I think any cunters who have never seen the original Gerald Pauschmann video on her (he is a brother cunter), will thoroughly enjoy this: