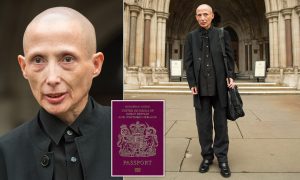 A further CUNTING for Christie Elan-Cane.

The misguided freak has just lost its Supreme Court appeal, in an attempt to make us all have “gender neutral” passports.

It doesn’t need a passport itself as it can transform into a bat and go anywhere it wants to scare the living shit out of those unfortunate enough to see it. Garlic and wooden stakes all round!

How low the trannies have got this country to sink. This twaddle from a report by a comittee of MPs from all parties.

1)”Transgender people in the UK face “high levels of transphobia” on a daily basis and they have “a long way to go” to achieve equality in the UK, MPs say.”

No they fucking dont. They say they do. They face piss taking which is richly deserved.

2)”A “root-and-branch review” of the NHS’s treatment of transgender people.”

So should the NHS ignore science and treat tranny men for prostate cancer and so called women for cervical cancer? Fucking ludicrous.

3)”Urgent clarification on the position of transgender prisoners, given the “clear risk of harm” if trans people are held in prisons according to their birth genders. It cites the cases of two transgender women who died in 2015 while serving time in male jails”.

And what of the degenerates getting into women’s jails?

4)”Official recognition of gender should be based on “self-declaration”, rather than a “medicalised” assessment.”

So any fucking prevert can self declare and get into women’s facilities?

5)”Mandatory training for police officers on transphobic hate crimes, and the extension of hate crime laws to cover gender identity.”

Hate crime as in piss taking? I suppose it gives the cops more reason to ignore actual crime. Expect the Met to lead the way.

6)”The lowering from 18 to 16 of the age limit for obtaining official recognition of a new gender without parental consent.”

7)”The option to record gender as ‘X’ in a passport, and an end to the need to show a doctor’s letter to alter the gender shown.”

So these fuckers can doctor a passport as they see fit? Do Border Force have a say in this bullshit?

Gender variant, if it means anything is a mental condition.

9)”Guidance for sports bodies to make clear that exclusion of transgender players on grounds of safety or fair competition is rarely justified.”

I emphasise that an all party group came up with this woke, dangerous nonsense. The spokesperson on R4 for this hogwash is a Tory MP. Yes, a fucking Tory.

There no longer seems to be a difference between the loony left and mainstream in politics, business, the Arts etc. No fucker is putting the common sense view on this shite.

64 thoughts on “Christie Elan-Cane (4) And What Trannies Demand”