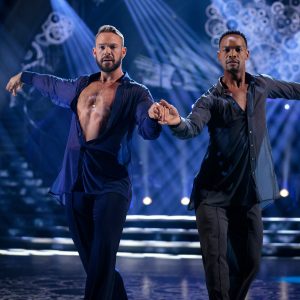 Currently on holiday in Fuerteventura bit too much sun and way too much beer 🍺 means mrs everyonesacunt and I have retreated back to barracks where she has put this fucking shit fest on the telly. Normally I refuse to watch tv but she would call me a light weight if I fucked off to bed.

What a pile of shit this is. Claudia the fucking fringe. What a twat. The northern bit of Totty with Bernard Mannings accent. Anton I’m important beck. Shirley the face lift. G ay dancers Two fucking blokes holding hands and mincing around the floor. And who what the fuck is the guest judge Cynthia Erivo. I honestly thought she had a bone 🦴 stuck though her nose.

So glad I don’t watch telly at home and pay the tax to fund such a bag of cunt. Ps some fucking child man singer mid way through the pile of shite sounded like winkle tits having her fringe shaved 🪒 off. Mrs everyonesacunt informed me he’d appeared on one of Cowells karaoke shows.

I have to walk past the idiot lantern on my way to smoke politely outside. I try to avoid even looking at its wonderful glowing colours.

As I wandered past It caught my eye that two men were dancing together. But the thing that irritated me more than anything was the peaky blinders hats.

I’ve accepted that TV is fucking wank and it’s normal for men to dance together. BUT, I instantly know if I see a man wearing that kind of hat, he is straight into the cunt memory box.

Therefore your honour, I second this nomination, and would like to request a separate nomination for those fucking ‘ I’m obviously a cunt hats ‘.