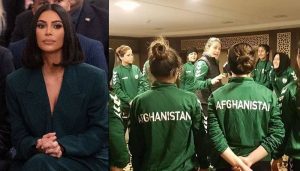 A cunting please for nonentity lard-arse Kim Kardashian please, for paying some airline to dump an entire Afghan women’s football team and their numerous relatives (totalling 130 cunts) on the UK.

If this Yank is so keen to take these unfortunates out of Afghanistan why not arrange to have them delivered to the U.S. where she could visit them on a daily basis to see how they’re faring? Presumably cos America would have told them to fuck right off, even with Creepy Joe in charge.

Not Blighty though, uncontrolled open door immigration is the name of the game here.

And seconded by: Geordie Twatt

I’d like to second Ruff Tuff’s nomination, but also suggest a beneficial outcome to the issue.

How about getting the entire team to sign for Newcastle United? With all their new-found riches, the Toon could easily afford to house, feed and clothe the 130 Afghan hangers-on. And I’d expect the team to show a marked improvement over the useless bunch of girls playing for them at the moment. So surely a win-win solution.