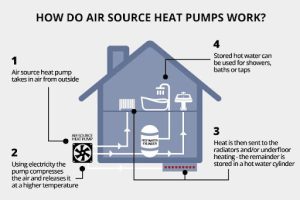 Boris Johnson is a stupid cunt.
He has decided that every home in Britain should be heated with air source heat pumps.(His Princess NutNut has probably done all the “deciding” for him – Day Admin)

They are full of a refrigerant gas, usually R410a or R32 which has to be manufactured in huge gas plants.
Those 2 gases, although not as harmful to the environment as other refrigerants, still present a risk and the handling and disposal of the gases is strictly regulated. Each heater will have at least a couple of kilos of gas.
The biggest gas processing plants are in the far East.

The heaters, so as not to rust, will have to be in heavy duty plastic housings.
Within the heaters there will be a PVC heat exchanger.
No heater lasts forever so the significant amount of plastic within each heater will eventually end up as landfill.

The heaters contain copper tubes, much of which as the main metal used in the evaporator, as well as titanium coils within the heat exchangers.
These metals have to be mined and processed.

Although air sourced the heaters need electricity to work, and in the case of heating an average sized home in the UK, a fucking lot of it.
I am not sure how much people in the UK are paying per kw/hr for electricity, but if we assume the price at 20p and the heater will be running for 24 hours a day for 10 months, then the average electricity bill for an average home will rise by over £300 per month.
A lot more depending on the quality of the heater.

China is the world’s largest industrial nation and they really don’t give a fuck about the pollution that they create.

So where exactly are heat pumps manufactured?

Well…. China actually.
Guandong Province mainly.
There are dozens of factories there that are eager to boost their output to satisfy the UK’s obsession of saving the planet.

So, you fat, useless, lazy cunt.
Have you thought this one through?

(By the time people realise what a big expensive mistake this idea was, Boris will be in the House of Cunts, well away from all the flack – Day Admin)