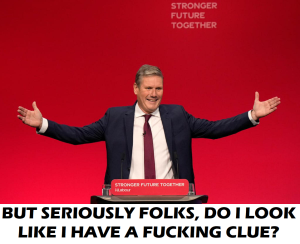 The Labour Party is now an absolute shitshow of slogan-spouting circus freaks. The absolute state of it. You cannot believe your eyes looking at them. It’s a cult of jobless, talentless, Marxist cunts.

At one point at the party conference, a BAME speaker asked white members of the conference to refrain from over-representing themselves by raising a hand during questions. Beggars belief. Apartheid by any other name.

It’s utterly embarrassing watching these clowns stammer through their buzz phrase-laden speeches, milking applause by name dropping a victim group. Shows just how far down the crapper Labour have fallen. I think it’s one more flush from exiting the u-bend at this point. And hasn’t it taken a lot of toilet paper?

After the pure entertainment of ‘Cervix Gate’ it’s clear that Labour is a fractious rabble of confused, anxious and bemused ideologues each trying to out-victim eachother but not knowing which victim to plump for. So much so it might implode under the weight of its own contradictions.

‘To trans or not to trans? That is the question’ And it’s one even Queer Stammer cannot answer without galloping over his words like a startled horse.

The fact that they use the word ‘comrade’ to refer to each other makes my piss boil on its own. Don’t they know we can see and hear them? To me, being an out and proud Commie in a public forum is as morally and socially repugnant as goose-stepping around Tottenham in an SS uniform. It should be shamed and shunned for what it is: sponsoring genocide

Yet, Communism’s genocide against its own people somehow doesn’t retain the same stigma as the holocaust at a Labour Conference. Oh no.

They should be ashamed of themselves for being the unelectable, out of touch, petty, delusional, hate-filled and racist set of cunts they are.

The Tories are such cunts. But, they don’t hold a candle to the modern Labour Party. There is now no legitimate opposition to the Tories and therefore our democracy is all the worse for it … which underlines what a catastrophe Labour cause every day they don’t get their fucking act together.

Labour, here is a small list of things that would make you instant electoral gold

1. Stop spouting bollocks about trans people and BLM. Start talking about native workers rights, the compression of wages, creating jobs ie caring about working-class people aka not alienating the red wall etc.
2. Stop waving rainbow flags and start waving the British flag
3. Stop pitting everyone against each other as members of oppressed groups and start talking about everyone just being British like in the 90’s (remember cool Britannia?)
4. Stop going on about hate crime bills and hate speech and start arguing for the protection of free speech. Also, start policing knife crime instead of arresting people for offensive fucking tweets.
5. Stop being a thinly-veiled front for a Communist dictatorship in waiting, you bloody fucking cunts.

I could go on…