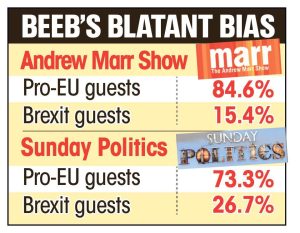 THE BBC BIAS AGAINST THE CONSERVATIVES:

Is it a coincidence that this old story surfaces today.? Perhaps – or perhaps not. I know Dame Kweer is desperate, but his anxiety is clearly getting through to the BBC. This is hardly Watergate, but no word from the unbiased BBC about Anthony and Cherie and their very large tax savings, just annunced, just as there was no word on the News Quiz about cervixes or scum. One of the old garts on the panel even said how much she likes Starmer. Imagine if Boris or Trump had made the cervix remark: they would have pissed themselves over it – Starmer: a respectful silence.

I thought Tim Davie was going to clean out the BBC stables, but the shit appears to still be there.

(Ordinarily this would be moved to the exclusive BBC thread. But on this occasion it merited a Post of its own. – Day Admin)