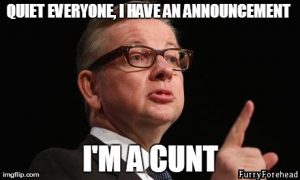 I don’t know if this twat has been nominated before on here, but I’d be surprised if he hasn’t. (This is his 10th cunting. Definite Wall material – Day Admin)

But this bloke is fucking useless as a minister, you only have to look at his tenure as a ministerial secretary of state to realise he hasn’t got a Scooby Doo before being “promoted” or pushed sideways into some other ministerial job. Repeat and Rinse.

Fuck know what he has actually achieved that has benefited the country as a whole during any of those tenures, but clearly being shuffled around in various non-jobs suggests he either has something on cunts like Boris and Maybot; or that he is just been passed around like a game of pass the parcel just for the giggles.

Either way, the bloke is a very lucky cunt for being totally ineffectual