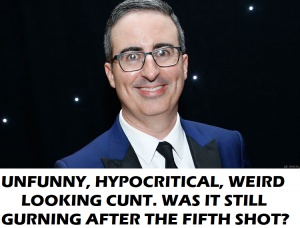 John Oliver is a cunt. This British twat pontificates on his American late night show. He is basically the American James OBrian but has lifted his entire style from Ben Elton. Swap Thatcher for Trump. What a boring cunt. With Trump gone hes going after Tucker Carlson. Look him up. What a wanker.