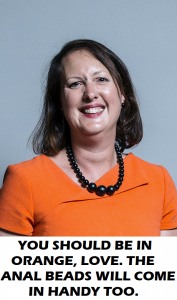 Victoria Prentis MP and Fisheries Minister, who failed to read the Fisheries ( or any other ) agreement , before voting it through in Parliament. As Fisheries Minister, I would have thought that even a cursory scan was a simple requirement.
So. Hauled before the committee to account ( following SNP outrage at her incompetence ) the said Minister said that she ..”..didn’t have time to read the agreements ” as I was too busy arranging the Nativity Trail event at that time..” ( and so on ) “It was a matter of priorities ” ( EH!!!! )
She ( Prentis) went on to say, that “we were not given what we asked for of the EU” ( THEY are OUR Fucking waters you dim bitch ! )” but we did jolly well.” ( Did we ? )

The sad sack of shit ( married to a lawyer of course ) has been elected to the North Oxford Constituency by the flock of sheep who put her there. As an ardent remainer, she voted for the approval of Johnson’s “all singing, all dancing , oven ready, most brilliant deal of the century” because the head shepherd said so, “and I followed the party recommendations of the Prime Minister”

Well, this is an example of the fucking cretins that Govern us. A cunting please for this sad sack of Tory Dollop forced from the buttocks of a travellers Donkey!