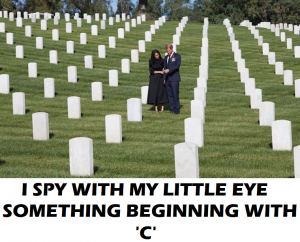 Let’s have a common cunting for those (formally royal) neo-common cunts, Mrs. and Mr. Markle-Hewitt.

As mentioned in another thread we haven’t seen much of the Dynamic Dimwits since the election. Or have we? As I have said before these two Majestic Morons are in at least one of my news feeds (here in the states) every, single, fucking, goddamned, day.

The latest saga in the “Tale of two Shitties” goes like this:

After a noticeable absence from the covers of many tabloid magazines, a story came to light in the American Press that Halfwit Hal and Halfbreed Meg are so unpopular, that every time their faces deface the cover of a magazine, that said magazine sales plummet.

Accordingly, the attention seeking formally royal attention whores and their publicity machine hit upon a plan. As Major Hewitt is a hero of the British Army, why not take advantage of that with the upcoming Remembrance Day celebrations.

And with that, a story was put out that as a career Military officer, the spare heir was deeply moved to visit a cemetery and in a “deeply personal and private” moment would “lay a wreath.”

They then cast around for a suitable location. First reported was the Los Angles War Memorial Coliseum…a sporting venue. Later it was said to be a military cemetery in Los Angeles. I don’t know which is correct but with publicity team and photographers in tow, the Hapless Halfwit and his Merry Wife went off to commemorate this deeply private and personal moment.

As you might imagine all did not go well. First we don’t celebrate Remembrance Day here in the states. We have Veteran’s Day celebrated on Nov. 11. Next…not surprisingly there aren’t many “English war dead” in an American cemetery. And third, questions were raised about why you need a PR team and photographers to document a “deeply personal and private moment” and then release pictures from that event to the press.

It couldn’t get any worse for Her Majesty’s Malcontent Grandson. But it did. It came to light that Major Hewitt had issued a public request for the Palace to “lay a wreath” in his name at a public ceremony in the UK.

That request was denied (as reported in the press) by palace courtiers who informed the displaced Duke that, as he was no longer Royal he was no entitled to Royal privileges like participating in Royal ceremonies. This Royal rebuke was referred to in the American press as a public humiliation.

As if this weren’t enough the Sussex PR team kicked into high gear. First the Markle Militia stormed the pages of Social Media and blasted the person most at fault for the whole affair…the Duchess of Cambridge. It seems in the eyes of the Markleite faithful, Kate has never supported her brother-in-law nor her sister. (Note the dropping of the in-law part.) She (Kate) being jealous of the glamorous American actress and acting out of spite convinced…someone in the palace…to publicly rebuff and disgrace the Afghan war hero.

In support of this the American magazine Newsweek put forth the notion that as Harry has spent 2 tours of duty in the Afghan wars “killing Taliban” he should be entitled to participate.

But if you can believe it, it only got worse from here. More Meghan sycophants began speaking anonymously to the press about how bad Me-ghantoinette was treated. She gave up everything for this family and what did she get in return? The horrors of institutional and systemic racism!

Furthermore, she is now happily ensconced in her “forever home: nestled deep in the Golden Hills of her beloved home state of Commiefornia.

So there you have. The trials and tribulations of the most clueless cunts to ever disgrace 2 nations. Mrs. and Mr. Markle-Hewitt…the Duke and Duchess of Suckit. They may no longer be members of the Royal Family. But they are Royal Cunts of the Highest Order.

.…and this from Quick Draw McGraw

First he whinged that his request to have a wreath laid at the Cenotaph on his behalf was rejected, then he and Princess Sparkle Tits were photographed “privately” laying a wreath at a military cemetery in Los Angeles. As is becoming increasingly common with these two creatures, they managed to make Remembrance Sunday all about them. What a pair of cunts. Why would the request be granted? Harry and Sparkles didn’t want to carry out Royal Duties, but they wanted the titles that go with being members of the Royal Family. Well, you can’t have it both ways.

According to them, it was a private moment of reflection. How convenient then, that there just happened to be a photographer present to record it. There was Sparkle Tits, standing with her fake expressing of solemnity, as Harry, with his brag rags shining on his chest, knelt and laid his wreath. Then they stood and their bowed their heads. I used to have respect for Harry. He served the UK, did two tours in Afghanistan, then he meant Sparkle Tits and became the world’s biggest cuck.

Harry has no right to complain about the Palace refusing to lay a wreath on his behalf. He turned his back on the military, his family and the UK, for an piece of ambitious, far left skirt who wanted a title. He knew that remembrance day was coming, it happens every year. He could have made arrangements to be in the UK and lay the wreath in person, but no. And once again, this achingly woke couple, who continually claim to want privacy, have managed to make a solemn occasion all about them. Fuck off, you pair of cunts.