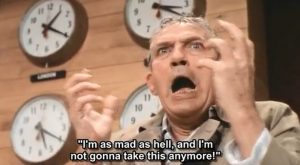 Summary: The play version of Howard Beale’s famous “I’m mad as hell and I’m not going to take it anymore!” speech.

HOWARD: I don’t have to tell you things are bad. Everybody knows things are bad. Everybody’s out of work or scared of losing their job, the dollar buys a nickel’s worth, banks are going bust, shopkeepers keep a gun under the counter, punks are running wild in the streets, and there’s nobody anywhere who seems to know what to do and there’s no end to it. We know the air’s unfit to breathe and our food is unfit to eat and we sit and watch our teevees while some local newscaster tells us today we had fifteen homicides and sixty-three violent crimes, as if that’s the way it’s supposed to be. We all know things are bad. Worse than bad. They’re crazy. It’s like everything’s going crazy. So we don’t go out any more. We sit in the house and slowly the world we live in gets smaller and all we ask is, please, at least leave us alone in our own living rooms. Let me have my toaster and TV and my hairdryer and my steel-belted radials and I won’t say anything, just leave us alone. Well, I’m not going to leave you alone. I want you to get mad. (He gets up from his desk and walks to the front of the set.)

That’s it. I’ve had it with the foreclosures and the oil crisis and the unemployment and the corruption of finance and the inertia of politics and the right to be alive and the right to be angry. I want to hear the little man and woman — I want to hear you now — go to your windows — yell out so they can hear you — yell and don’t stop yelling — so the whole world can hear you — above the chaos and degradation the apathy and white noise.

Nominated by: the cunt of montybisto