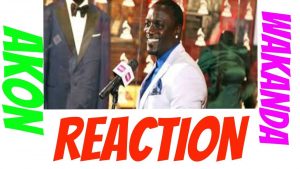 A what the fuck is wrong with you, cunting for some degenerate, virtue signalling, rap star, cunt named, Akon.

First things first; any one named celebretard is a cunt. Madonna, cunt. Bono, cunt.
Beyonce, cunt. Sting, cunt. Cher, cunt. The recently cunted Banksy, cunt. Sadly, the list is endless. And sadder still is the edition of this stupid cunt known as Akon.

You cannot make this shit up!

Since 2018 this carpet kissing, jungle bunny has been in talks with the government of Senegal to build a modern African utopia just outside of Dakar. The goal is to make this a tourist destination for Black people from all over the world. Senegalese President, Macky Sall, has reportedly given Akon 3 square miles of land near some fucking airport for the city. Development is said to be well under way, with first phase completion sometime in 2023.

On September 1, Akon laid the utopia’s first stone and claimed new found inspiration in the tragic death of the world’s most famous actor that nobody ever heard of, Chadwick Boseman…THE Black Panther himself. Speaking at the ceremony, Akon said, “As you come from America, or Europe, or anywhere in the diaspora, and you feel like you want to visit Africa, we want Senegal to be your first stop.”

This great urban utopia will be a modern virtue signalling paradise. It will be designed by architect Hussein Bakri to resemble the fictional city of Wakonda. It will be entirely solar powered and will even have it’s own currency. Well not really. There will be no actual currency just a cryptocurrency named after it’s glorious founder…the Akoin.

Upon completion it will house 300,000 people and is expected to bring a financial boom to Senegalese tourism and indeed it’s overall economy. Which will be greatly need as the project is estimated to cost over 6 BILLION dollars.

Wait. What? Six BILLION fucking dollars! For a new utopian city, designed to bring black tourists to a 3rd world shit hole, that ranks 127th out of 150 on the Human Development Index. Are you fucking out of your mind? What the fuck are you thinking?

Six BILLION dollars? As of 2018 Senegal was $14,500,000 in debt that it couldn’t repay and was applying for loan relief from the IMF? Where in the fuck are they getting 6 BILLION dollars to build fucking Wakonda?

Do they have any idea of the real good they could do with that money? For 6 BILLION dollars they could line that famous puddle with mud bricks and run a bamboo pipeline directly to M’Tembe’s fly infested, dung covered hut. He’d never have to walk over there again. For Mohammed’s sake, they could even weave a mesh of palm leaves and filter out the Rhino piss. What the fuck are these cunts thinking?

One other point needs to be made here about this cunt Akon. In April of 2007, he performed a simulated sex act with a 15 year old girl at a concert in Trinidad and Tobago. The act was filmed and uploaded to the internet. It was also shown on local TV…CCN TV 6. The video was condemned by several Fox News personalities and removed from YouTube but reports say it was subsequently restored.

Most virtue signalling celebretatds are stupid cunts. But this degenerate Akon is a special kind of stupid cunt.