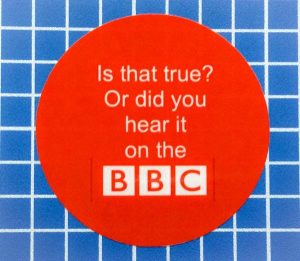 Beat the drum, light the lights, we have nothing to hit but the heights – or lows of the BBC. Could anything knock Covid19 off the top of the news on Wireless 4 – could anything cause more vocal distress to Justin Webb, Evan Davis and Sarah Montague? – surely that would be impossible. It has occupied their every waking hour for weeks. Oh yes – it could: Welcome to the new BBC Wireless 4 cause of the week – Racism in general and George Floyd in particular. Hours have been spent going on about Trump, tear gas and Bibles. Dame Kweer has been reported favourably as being “surprised” Boris has had nothing to say about George (unlike Dame Kweer he has more pressing worries than what his idiots Lammy and Phillips might say next without thinking, which they never do, and which dick to suck next). This morning they struck rock bottom. Just after the Shipping Forecast (I am still interested even after all these years) comes a programme called Prayer For the Day where for two minutes an Imam, or Sikh, or, if you are talking mainstream religion, a woman will attitudenise for two minutes. This week it is an American woman of colour – a Canon no less (they love American wimmin of colour on Wireless 4, especially pseudo intellctuals like Bonny Greer) and she told us in VERY SERIOUS tones that “racism is a sin”. There was a bit about white privledge as well in there somewhere. Just to show how Wireless 4 is pure, and entirely free of sin, later today at midday they will be broadcasting “Girl, Woman, Other” a daily misery memoir reading for two weeks about – well, American wimmin of colour. If you miss it then it is on again tonight at 2245, so you have a chance to improve your aim then.

I long for the days when the BBC entertained rather than preached – as Dr Johnson might have said “The BBC preaching sir?, The BBC preaching is like a dog walking on its hind legs. It is not done well – one wonders it is done at all”.

The old broad this morning sounded a right old battleaxe. She might have been Les Dawson’s mother-in-law “The wife’s mother came round again last night. After a short struggle we were able to sedate her again”.