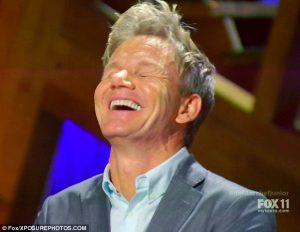 I’m rather miffed with the treatment of Gordon Ramsey. Now he’s not everyone’s cup of tea but what exactly has he done wrong? Gone to his second home in Cornwall before lockdown was announced in order to see it out there. He takes his exercise by riding his bike. Apparently the Coast Guard gave Gordon a warning for being 25 miles from home on his bike. Well firstly, there is no radius restriction on how far you can ride your bike, secondly 25 miles on a bike isn’t that far, and thirdly the Coast Guard can fuck off. What’s their part in the daily dinghy arrival, eh? Then the Cornish have been moaning that he goes out more than once a day. Well who gives a rat’s in the middle of nowhere? Its not like he stops to hug everyone he sees.

Meanwhile the Daily Panic Mail revels in Gordon’s misdemeanours whilst their readers comment like brainwashed morons that Gordon is an arrogant millionaire for being in Cornwall or riding his bike!

Apparently the Cornish call outsiders ‘ants’ or ’emmets’. How rude. Well there’s no tin left or whatever it is you used produce. With the attitude you have against outsiders, you’ll have no tourism left either. There’s no law against having a second home and its too bad house prices have risen and priced out your Cornish underclass from owning a home. Happens everywhere, why is Cornwall so bloody special?

Please nobody go to Cornwall again and let them stew in a demise of their own making. Their pasties give me heartburn and I can do without mead thanks. I’ll clot my own cream if I need to.

56 thoughts on “The Cornish”