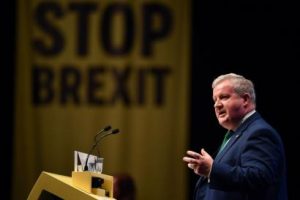 Christ on a bike. Those bloody Extensioneers just won’t call it a day. No, it’s any and every means at hand to try and obtain an extension to the Brexit transition period, so it’s no surprise that in their desperation, they’ve seized on the Covid-19 pandemic to further their aims.
Meeja reports indicate that a number of political figures have signed a letter to Michel Barmier (chief EU Brexit negotiator) supporting a two-year extension, to ‘assist the effort of national governments and the EU… in dealing with the dreadful epidemic’. Signatories to this epistle include Ian ‘Bloater’ Blackford, Ed ‘Ravey’ Davey and Caroline ‘Zippy’ Lucas.
‘Bloater’ is quoted as saying that ‘the government should do the only responsible thing’ and accept a two year extension. The only responsible thing, ‘Bloater’? Yeah, let’s extend the transition to the end of 2022; let’s play right into Barmier’s hands. The EU is bound to insist that in an extension, it’ll be all give on our part, all take on their’s. So let’s allow the EU to carry on acting the cunt with us. Let’s keep the UK tied hand and foot to EU regulations and legislation, and the jurisdiction of the ECJ. Let’s allow them to carry on plundering our fishing waters and our coffers for longer.That would be really responsible.
The government has made it clear repeatedly that it’s not going to ask for an extension, which of course the EU is desperate for us to do. We’ll be leaving on WTO terms in December if the EU cannot, or will not, recognise that as a sovereign nation, the UK will no longer accept its blatant attempts to impose its will and treat us as a vassal state.
Therefore, quite what these cunts hope to achieve by writing to Barmier, other than to listen to the sound of their own yapping, is beyond me. In any event, to me this is an attempt to collude with the EU against UK interests and against the democratically expressed will of the British people. If it was up to me, I’d be thinking that it’s high time to round up the usual suspects.

Ed Davy, Caroline Lucas, Ian Blackford and all the other remoaning politicians are in line for a nomination. In fact, not only are they cunts, they are out and out traitors to the United Kingdom. In an act of sheer desperation, these despicable fucktards are now using Flu Manchu as an excuse to write to the Fourth Reich’s chief negotiator, the arrogant frog, Michel Barnier, to claim that the outbreak is sufficient grounds to extend the transition period by up to two years (and the Lib Dems wonder why they got the shit kicked out of them back in December), and asked that Barnier do just that. There’s just one flaw in here. It’s not Barnier’s decision. The UK has already left the EU, and while we’re still temporarily bound by EU laws and regulation, there isn’t really any way the EU can extend the transition period without our consent, and that isn’t going to happen.

It’s about time these fucking scumbags realised that the UK IS leaving the EU, with or without a deal, and there is FUCK ALL that they can do about it. We’ve had nearly four years of politicians and other assorted anti-British filth going out of their way to stop Brexit. They’ve failed. The British people, even a lot of remainers, are sick of these repeated acts of treason. How lucky for them that the biggest traitor of all, Tony Blair, got rid of our treason laws. Time for Boris to step forward and tell these cunts to shut the fuck up.