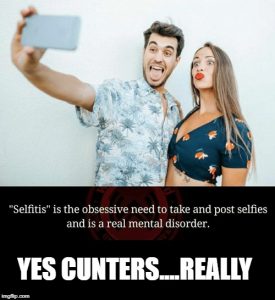 “A ‘selfie’ is a self-portrait, digitalised photograph, typically taken with a digital camera or phone. Selfies are often shared on social media”. So says Wikipedia for our elucidation.

Well, I think we all knew that much without the need to be told. What I find much more interesting is the obsession with self-representation that the selfie demonstrates. The phenomenon strikes me as distinctly odd, even bizarre; a manifestation of the kind of self-centred behaviour which seems so prevalent these days. In fact ‘selfitis’, the compulsion to take selfies and post them for others to see, has been classified as a genuine condition by psychologists. A ‘Selfies Behavioural Scale’ has even been developed in an attempt to clarify the various levels of addiction experienced by individuals.

It should be added that there is also some scepticism about the validity of the condition among clinicians, but as a mere layman, I for one am convinced, and offer an example which demonstrates its reality, at least to me.

The wife and I had to go into town the other day. The weather could only be described as totally shit: howling wind, driving sleet, dark, threatening clouds, and bitterly cold. And yet, there in front of the art gallery and museum, stood a couple of Chinese tourists, soaking from head to foot, phone extended on a selfie stick, busily snapping pictures of themselves. And believe it or not, they were wearing face masks, no doubt to protect themselves from catching coronavirus from us. The irony of the situation clearly escaped them as they stored up memories to be treasured and passed on to family and friends; this is us standing in the pissing rain, masks obscuring our faces…..Don’t we look great?

Yes, I’m convinced that selfitis is real and a total cunt, as persistent and annoying as all the cunts afflicted by it. And there are a fucking lot of them.