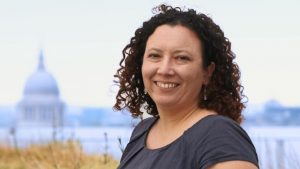 MAYA FORSTATER, WHO IS APPARENTLY WRONG FOR STATING THERE ARE TWO DEFINITE GENDERS THAT CANNOT BE CHANGED…..YES, REALLY.

From the murky depths of the legal profession there heaves into view someone you’ve never heard of, and neither had I. I have pleasure in cunting the judge at an employment hearing who has determined that it is illegal to ask the real sex of a transgender thing:

The case was viewed as a test of whether gender critical views – that there are only two biological sexes and it is not possible to change between them – could be protected philosophical beliefs under the 2010 Equality Act.

Employment Judge James Tayler rejected that view in his landmark judgement, which said Miss Forstater’s views are ‘incompatible with human dignity and fundamental rights of others’.

Er, when did freedom of speech become incompatible with fundamental rights?

‘Men cannot become women’ is no longer a permissible point of view. Soon it will be a hate crime, and ultimately a war crime.

When does this shit stop oozing from the rectum of society?