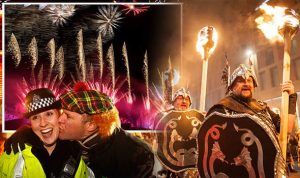 The period of mist and mellow fruitfulness has passed, and we’re plunged headlong into that time of conspicuous consumption referred to as ‘The Festive Season’.

Now aside from the fact it starts about the middle of September, I’m okay with Christmas. It’s a happy time, to be savoured with family and friends, and of course it’s a magical event for the Grandkids. But no sooner is Christmas done than the dreaded New Year arrives. I’ve never really seen the point of this additional binge so hot on the heels of the previous one, but this year I’m dreading it, as the wife and I will be spending it with the outlaws in Edinburgh.

Based on previous experience, there appear to two ways of celebrating Hogmanay in that grand auld toon. You can join the crush in the centre, where about a hundred thousand punters pile into Princes Street and recreate the Black Hole of Calcutta on a vast scale. There you’ll stand for hours, crushed like a sardine behind crowd barriers in the freezing cold (and like as not, pissing rain), while complete strangers tell you how much they love you, and everyone tries to convince everyone else that they’re having. a. wonderful. time. At midnight the fireworks will briefly blossom over the castle, then with a sense of anti-climax, everyone will stagger off, leaving behind several tons of litter, and hundreds of gallons of piss swilling around in doorways.

Alternatively, you can congregate at the in-laws, where dozens of complete strangers will tell you how much they love you. Old gits will dampen the atmosphere by insisting that the telly is on. This is so they can watch her off BBC Scotland’s early evening news programme introduce a series of cunts in tartan, who will proceed to prance about like fannies whilst yelling ‘yeeee ha!’, accompanied by a couple of tools playing unrecognisable jigs on fiddle and accordion. Everyone will try to convince everyone else that they’re having. a. wonderful. time.

As midnight approaches, mein host will instruct everyone to ‘charge their glasses’, and the reverential countdown to ‘The Bells’ will commence. Three, two, one… ‘Happy New Year!’. Everyone will hug everyone, and my mad bitch of a sister-in-law, now well oiled, will grab hold of me, shove her tongue down my throat and attempt to play ‘Auld Lang Syne’ on my tonsils. Then everyone will attempt to neck more food and drink than seems humanly possible while some cunt insists on bawling ‘My Love Is Like A Red Red Rose’ at the top of his voice. Matters will proceed in this vein until around five am, when the wife and I will collapse into bed. The room will then proceed to revolve around us as we hover on the tortured fringes of sleep, feeling like death warmed up.

Around midday I’ll struggle out of bed in urgent need of a piss. Then shivering and with a mouth that tastes like a camel’s enclosure, I’ll lurch downstairs in search of coffee. The wife, normally the epitome of womanly loveliness and elegance, will resemble the Wreck of The Hesperus, and will plead pitifully to be left to die in peace. In the kitchen, I’ll be greeted with a boisterously cheerful ‘Happy New Year!’ from the in-laws, and an enthusiastic ‘let’s get the bacon rolls on!’. Jesus. A bacon roll’s just what I’ll need when my head feels like a cannonball that’s about to plummet due south and exit explosively from my arsehole. ‘Any Andrews’ Liver Salts?’ I’ll croak. ‘Ha ha’, they’ll crow, ‘th’ Anglish never cad hawld their drenk!’

And New Year’s Day will drag on, with me doing my utmost to avoid noise of any description and alcohol of any kind, and longing to get back to the comfort of my own bed. The awful horror of excess indulgence and enforced joviality is bad enough, but what I really can’t stand about Hogmanay is the self-congratulatory heartiness of it all; that ‘here’s tae us, wha’s like us? Gey few, an’ they’re a’ deid’ maudlin, mawkish sentimentality. Mercifully by the 3rd of January we’ll be back in the quiet of our own house, and it will be, as my dear old mom used to say, ‘as far away as it will ever be’. Roll on.