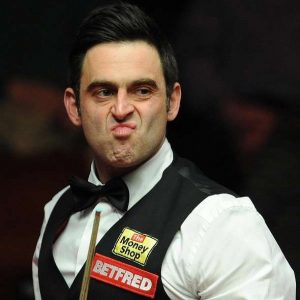 I know to cunt Ronnie would be to the most ardent snooker fan the equivalent of blaspheming in front of the Archbishop of Canterbury and there is no doubt O’Sullivan is one of the game’s greats, but frankly some of the glitter is now coming off the star, but the more problematic his wins become, the bigger his mouth gets:

At 41, Ronnie is not the player he was ten years ago, but his way of staying on top is straight out of the ‘Norma Desmond’ school (“I’m still big, it’s the pictures that got small”) – make yourself big by making everyone else feel small, denigrate your fellow players (as he does in that article though the 105th ranked player came close to knocking the great man out), intimidate your opponent by sitting there picking your nails, rubbing your nose, screwing your face up and looking intimidating and glaring, while the other bloke is at the table. Swagger round the table as your adoring audience lap it up, cheering and clapping. Enjoy the glad-handing of the commentators who think the sun shines out of his arsehole.

When things don’t go his way, (that is when he doesn’t win every frame with at least 147,) he whinges like an old woman. He will have tantrums like a five year old. His biggest threat, (or promise,) is to retire, and has been for the past ten years.

Please Ron do it, don’t just say it, and shut the fuck up.