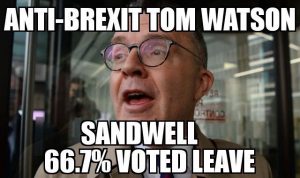 I’d like to nominate Tom Watson for a cunting!

This skidmark in the kecks of British Politics undercrackers now wants Labour to pledge for another referendum before agreeing to hold a General Election in their party manifesto the democracy denying cunt!

Fatboy Slim clearly doesn’t fancy Labour’s chances too much in a GE so wants to have his Slimming World cake and eat it by trying to get the original democratic referendum result overturned any which way, aided by his cuntish mates Emily ‘Flabberguts’ Thornberry, Dame Queer Starmers, Hilary ‘Mincer’ Benn and Yvette ‘Sugartits’ Cooper. Because you don’t agree with the result, I say get to fuck, you Marxist cunts and see if the public back you up in a GE, which Labour have been banging on about for the past few years!

Steptoe also fancies getting more splinters in his arse by sitting on the fence neither advocating to leave or remain, in Labour’s new manifesto…. they are the gift that keep giving.

The sooner these cunts are purged out of British politics the better.