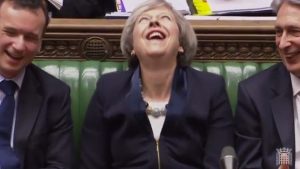 Theresa May, again. She’s just lead the Conservative party to its worst defeat at local elections since John Major was PM. Over 1200 seats gone, and all because of the ignorant cunt in Downing Street, and her swivel eyed determination to destroy democracy, the Tory party and especially the referendum result. Even now, after THREE defeats, she’s planning to put her unbelievably shite deal to the vote AGAIN. The definition of stupidity is doing the same thing over again, and expecting a different result. Going off that, she’s a fucking moron.

The past three years have shown that our political class are no longer fit to sit in parliament. And she is the worst of the lot. And considering we have the likes of Bercow, Corbyn, Abbott, McDonnell, Soubrey, etc, that takes some doing. As I’ve said more than once, she needs to go. She refuses to resign, as she should, but apparently she considers it her duty to ‘see Brexit through’. Her duty was to get the UK out of the EU. She started in a strong negotiating position and deliberately fucked it up. Since then, she’s done increasing damage to our negotiating position. She has failed to deliver what she promised to deliver. Her duty now, is to get the fuck out of Downing St. And if she won’t do that, it’s up to her party to kick her out.