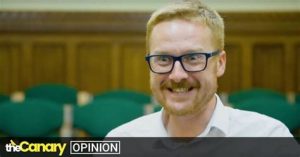 Lloyd Russell-Moyle MP, Chair of the All-Party Parliamentary Group On Kurdistan…
is a feckin cuuuunt.
Indoctrinated at the monkey-houses of both Sussex AND Bradford, he is currently MP (“Labour cooperative”) for Brighton Kemptown. Nudge nudge, wink wink, need more be said ?

A vomit-inducing BBC vid on YouTube (about 4x as many dislikes as likes !!) opining that the demise of the Begum brat is a real tragedy.

This boy is an archetypal virtue semaphore, waving around like an flasher’s todger on the Paris metro. Another soulless ginger with the regulation hipster specs and appearance.