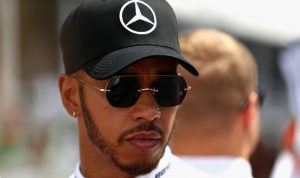 Lewis Hamilton is a total and utter prize cunt. This tax dodging private jet owning bell end is worried that Women and in particular Serena Williams (guess what card he is trying to suggest and play) are not paid enough as sports stars.

Now you cannot kid anyone with sport, you either have the talent plus attitude plus commitment to make it to the top or not. It does not matter what race or sex you are, you either can or cannot. Not even Hitler could cheat Jesse Owens out of four golds in 1936 and no one can deny that Usain Bolt is the fucking quickest human to have ever lived.

However if Serena is so fucking good and wants equal bucks then she should enter a unisex tournament and fucking win it. The same for all the women tennis players, if you want the most cash step up and beat everyone else. So Mr Lewis Hamilton when Serena or Sharapova give Rodger or Rafa a quick whipping over five sets they can go and claim the top prize. If they can’t they should be fucking grateful for every crumb they earn because if it was truly mixed they would only make the level of a good club pro on the challenge tour.

Also while I’m at it Lewis I don’t deny your a fucking top driver (one of the best out there) but until you win a world title when you car is five mph in a straight line slower than everyone else’s only then will you rightfully be called world champ. Until then take your private jet and fly the fuck out of here or come back and pay the British government their revenue.