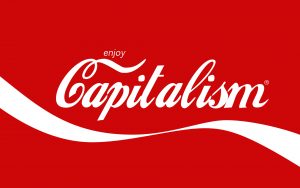 Time to nominate unregulated hypercapitalism for a cunting.

Interesting debate on the RMT thread about renationalising the railways got me thinking. Lots of folks on this esteemed website throwing the word “left” around to cunt various cunts. I’m just going to say that childish identity politics and the defence of jihadist pricks is not my version of being left-wing.

I’m not some perennial sixth-form cunt who hates capitalism but still drives Daddy’s Volvo to the horseys after lessons. If you have a talent, a service or a great idea that can be sold for a profit then fucking go for it, you deserve your success. Unfortunately, capitalism needs reining in to stop it becoming an oligarchy of the already-rich – left to its own devices, capitalism is a total cunt. Thus, Kim Uglydashian can amass a $50million fortune for showing her fat arse on the internet, wiggy fat Scouse granny-fuckers can get 300,000 quid a week for (badly) kicking a ball around and Donald “I’m a complete cunt” Trump can be considered an entrepreneurial genius despite being born with a silver spoon up his ass.

The current economic system of unregulated hypercapitalism is a complete cunt. Utter cunts like “Sir” Philip Green can get away with stealing millions whilst some junkie cunt is thrown in chokey for stealing a DVD player. The banking cunts wreck the entire Western economy and the fucking taxpayer picks up the bill. The railways are privatised at a quarter of their worth and then pay substantial dividends to their (thieving) shareholders whilst being subsidised by the taxpayer.

You wouldn’t run an unregulated zoo – the lions would pork their way through all the zebras, antelopes and various other crap herbivores before you could say “Alex Salmond is a cunt.” Similarly, capitalism needs to be regulated with rules to protect ordinary working people from utter cunts who would sell their nine year old daughter to ISIS for a couple of quid. Therefore to be “left-wing” is NOT to support chav scum spending their dole on White Lightning or Muslim slave women shooting out the next generation of jihadists on child benefit. It’s keeping a fucking leash on cunts who would fuck us all up the ass with a fish fork if they thought they could get away with it.

Socialism is probably shit and Communism is a joke. But unregulated hypercapitalism is also a total cunt and needs sensible controls or we’ll all end up living in a Charles Dickens novel.

Any logical fallacies in the above argument can be explained by it being Friday night and the second bottle of wine being open.