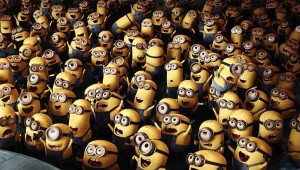 I remember as a young lad hearing the old man come in pissed after a night out bleating on about how good the comedian was and that he received a standing ovation. A rare occurrence I was lead to believe. You had to have performed brilliantly, have the audience in the palm of your hand and be top of your game.

But now the standing ovation comes too easily. I’m sorry to say I sat through and suffered the Xfactor one night which deserves a cunting itself if it hasn’t already been cunted. I heard some of the so called talent on that show and to be honest in my opinion most of the cunts couldn’t shout coals up a back lane. But no – the audience think its fucking great. All a contestent has to do is wail like a gospel singer, throw a few dodgy trills in and they’re up on their fucking feet.

For fucks sake sit your arses back in your seats you easy pleased cunts.

My ol’ dad used to say “They’ll clap owt in London” but these days they’ll stand up and clap owt anywhere.

Especially at Party Conferences. and especially when told to do so by the cunt at the front, off camera.

8 thoughts on “The Standing Ovation”