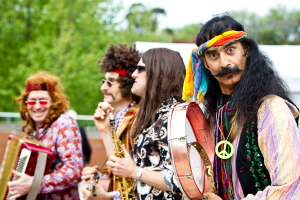 I fucking hate hippies. When they take/steal/eat/drink/smoke something that is your’s and you complain to them it’s all “Hey! Don’t be such a breadhead, man!” and “All possession is theft!” and other such bullshit. Then they do the “Hey, it’s only a ten pound note/ a phone bill/ a pack of cigs/ a bottle of beer (and so on…). It isn’t a living thing or real life, dude!”

Then they try the “If it means that much to you, I’ll replace it…” With their whiny emotional blackmail voice in full effect: Hoping that you will say “It’s alright, forget it..” Well, bollocks to that. I came across many of these cunts in my college days (and the bastards never get their round in at the pub!).

Never ever trust a hippy!