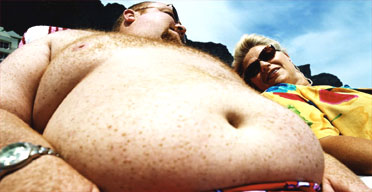 That’s right, FAT, not “obese” or “upsized” or whatever other don’t stress and stigmatise the damn greedy pig cunts euphimism is used. Last straw is the news that more millions of NHS money is to be wasted on gastric bands (aren’t Chas an’ Dave a gastric band?) in a futile attempt to stem the tide of bloated arses and diabetes flooding this once great nation. Will the cunts scoff less MacDonalds and slurp fewer Red Bulls and vodka? This is on top orf the reinforced ambulances and wider kazhi seats and wider doors ect ect that pcdom is rolling out at vast expense across the NHS and council housing.

Recall the days orf the Depression and the General Strike. Plenty of slim fillies around then. Fat is not beautiful. Eat less you pud’n shagging cunts.

Each new version of a motor is bigger than the last to squeeze in more gut and standard clothing sizes have all been ‘upscaled’ so that modom no longer has to wrap her cunt in clingfilm and suck in her blubber to squeeze her arse into that size fourteen. Bollocks on the table, as a time served old aristo one admits to the possession of an arse right regal generally encased in a pair of ever expanding plus fours but a way to go before I can’t lever it into me old Bentley. Enjoy me vitals and fuck orf the lot of you but I do not object to being called a fat old cunt. Par for the course donchaknow. Yet if one dare’s to return the favour to some gross slapper with her benefits goldmine fat brats taking up ten seats on the bus one is booted orf for “inappropriate behaviour”. One has one’s seniors bus pass so fuck orf. Fucking fat fascist cunts.