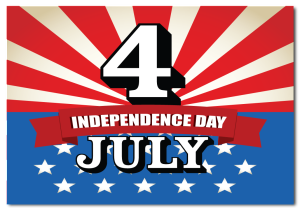 I just can’t let the 4th of July go by without marking it by cunting the entire nation of the United States of America. It just wouldn’t be right.

Every year, these wankers celebrate the “nations freedom and the brave men who died defending it”. That’d be the brave men who illegally invade foreign countries, stomp all over any nation that disagrees with them, and forces their dogma on the entire world. The biggest bunch of hypocritical bullshitters on the face of the planet.

The nation that “defends freedoms future” by bombing the fuck out of anyone who gets in their way.

The nation that turned up late for two world wars. Britain would would still be waiting now if it wasn’t for Pearl Harbour.

The nation that was populated by the dregs from the gutters of Europe and whose slogan was “No taxation without representation” when the British crown never received a fucking penny in taxes in the first place.

The nation that has laid claim to every invention it never invented and has rewritten history to suit its own ego. Orwell would have been proud.

Basically, a nation of cunts. Happy 4th July, you fuckers!

The American airforce are a bunch of oversexed, overpaid and over here cunts.

You can’t move down my street for Yank Airforce cunts in their rented houses, driving their left-hooker gas guzzling cuntmobiles. Loud, obnoxious, self-opinionated fucking nuisance cunts who insist on standing their shit motors on the drive to warm up while they finish their breakfast back indoors.

Can’t sit in the garden on a sunny day without the cunts roaring overhead in the AWACS and mid air tankers or screaming across the sky in F16s and Apache gunships. Top gun? Top cunt, more like it

Close the bases, send the cunts home and give us some fucking peace