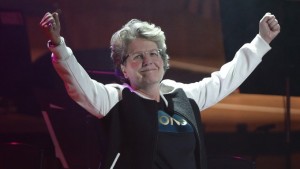 Sandi Toksvig is a woman? – well I never. Joking aside, I can’t stand the whining lesbian midget. I don’t know why, but she always reminds me of Bill Oddie. Alice Arnold and Sandi Toksvig were a couple until Alice ran off with that other bull-dyke Clare Balding. I don’t know what she’s got to bitch about, she’s had a fucking sinecure sucking at the BBC teat. But, of course, she ticks all the right boxes as far as the BBC is concerned.

This bollocks about getting the same pay for doing the same job. The feminists have worked round that one nicely now, haven’t they? The new argument goes like this – “we want the same pay for doing work of equal value” – whatever the fuck that means. Of course, I know what they mean by it. Some daft bint, sitting on her arse filing her nails, in a nice warm office back at the council depot, wants the same pay as the men out emptying the bins. No, like most pressure groups, what they are after is special treatment NOT equality.

I hope the poisoned dwarf gets large numbers of the hard of thinking to join “her party”, put up for election, and lose their deposits – ‘cos that’s what’ll happen. 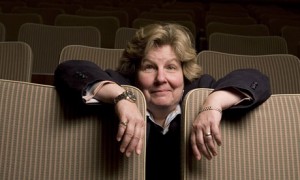 Sandy Toksvig – saw her on QI the other night.

I watched for five minutes just to get on my own wick. Her, leaning back, eyes closed, recounting some apparently witty story to a panel and audience of equally smug cunts.