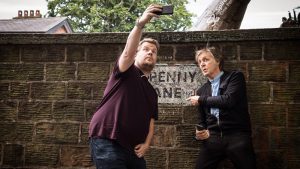 We all know about Fab ‘I love Kilary Clinton, I belittled and bossed around George Harrison, and did I tell you for the umpteenth time I was John Lennon’s mate?’ Macca, and Corden is also a colossal cunt… That Karaoke Carpool thing was the biggest pile of contrived and arselciking shite…

I always disliked Corden and I hate him even more now… The talentless lardarse was so sycophantic, especially when McCartney told the ‘Let It Be’ story for the 5000th time and Corden gushes “That the most beautiful story I’ve heard”…. What a Total arselicker…. The first scenes with the jukebox were totally staged …–One of the ‘customers’ was a bodyguard… A mate of mine was in there last week and he spoke to the staff….. The audience who run through the doors later were given tickets for the gig…

What a load of bullshit and what a pair of cunts…

What a load of pretentious marketing speak drivel! Like fuck it did. The Sex Pistols did more to change the face of music than the Beatles ever did. The Fab Four were a pop band that got lucky because Epstein was a brilliant marketing man.

If you want to hear a half decent Beatles album you won’t find it in Sergeant Pepper. After Revolver it was all downhill as McCuntney & Co climbed further and further up their own backsides.

Want proof it’s all bollocks? Look no further than Amazon who are selling an anniversary copy of the album for £109 with previously unreleased material. Basically five or six preproduction or remixed versions of the same songs. There’s a reason they’ve never been released before. It’s because they weren’t fit for purpose. Beef that up with a book and a couple of DVDs with old documentaries on them. Bingo! Loadsa money…!

No, if you want to hear Beatles music then listen to The Rutles who took their stuff and improved it. 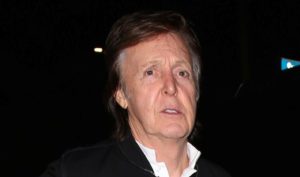 McCartney is in overdue for a cunting. At the time when Hopalong Heather Mills took him for 24 million I thought she was a money grabbing bitch but on reflection she deserved at least that for putting up with the scouse cunt.

Which Beatles song was written about Heathers Stump I wonder?

Macca was the most miserable tight fisted cunt I ever met. Getting money out of his wallet would require surgical intervention.

The cunt never did stand his round… 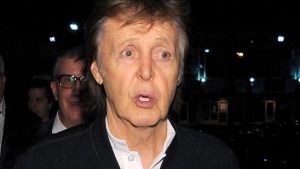 Paul McCartney is a cunt…

Well of course Macca can afford to be racially tolerant, as he will never have to live anywhere near places like Luton, Rochdale or Bradford… Also he denounces Powell and calls him a nutter, yet he works with that insane racist cunt, Kanye West and thinks it’s ‘cool’ that West uses the word ‘Nigger’ every 30 seconds… But of course Paulie says it as ‘The ‘N’ Word’…

He makes out it’s great but he won’t actually say it, will he? What a knob… No wonder George couldn’t stand the cunt…

Get out your thesaurus and look up synonyms for cunt – if there were any justice in the world you’d find a full-page photograph of Paul McCartney in characteristic “thumbs aloft” pose.What more is there to say about this droopy-eyed, scrotum-faced cunt with hair dyed black with an auburn afterglow (all that cash and still he looks like he’s done his hair at home with a tin of creosote)? If you thought all possible expressions of this cunt’s cuntitude had been exhausted, think again.

Is there any other cunt on the planet who resembles both a notorious child-killer (Ian Brady) AND a soap-opera transsexual (Hayley from Coronation Street)?

No. Just Macca then. What a fucking cunt.