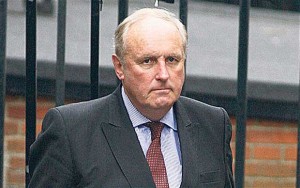 Let’s be clear about this right from the off: Dacre is the worst, lowest, most despicable kind of cunt there is – even a real cunt’s cunt like Bono or Alex Salmond would feel rightly aggrieved at being lumped together with such a malignant, cock-breathed Uber Cunt as Paul Dacre.

Despite the fact that his newspaper automatically condemns anyone who doesn’t accord with its own rose-tinted world view as crypto-communist saboteurs determined to bring the UK to its knees by any means necessary, Dacre’s politics – and his delusional sociopolitical paranoia – are not the issue here: it’s the endless tsunami of lies, hypocrisy and sanctimony which is so profoundly nauseating. The fact that the Mail is still openly referred to as a ‘newspaper’ seems somewhat oxymoronic too given the Mail’s abject failure to report facts without distorting them and editorialising every story to suit Dacre’s insidious illiberal agenda.

Leaving aside the Mail’s repellent attitude to women of which ISIS would be proud (in Dacre’s world, women are decorative objects, always “flaunting” themselves and being tacitly censured for daring to go bra-less, notwithstanding the efforts of the male photographers and picture editors to artificially enhance such images), Dacre’s cuntitude is best exemplified by the Daily Mail piece some while back in which Ed Miliband’s late father was extensively attacked over several days.

The Mail took one line from the diary of a teenage Miliband Snr and extrapolated this into a huge spread “proving” that Miliband Snr was “an enemy of Britain”. Because the teenage Miliband Snr chose to briefly vent his youthful frustrations in a private diary, that was justification enough for the Mail. As the row erupted and even the sad cunts who actually read Mail were horrified by this cowardly, spiteful (not to mention factually inaccurate) attack on a dead man, Dacre refused all requests for interviews and instead wrote further editorials supporting his insane view that anyone – even a teenage refugee just arrived in the UK – who wrote any kind of attack on our great British institutions was “an enemy of Britain”. Given that Dacre/the Mail hates and routinely attacks such great British institutions as the NHS, the welfare state and the BBC, I guess that makes Dacre/the Mail enemies of Britain too? The fucking hypocritical cunt. At least Miliband Snr enlisted and fought for Britain in WW2. What did Dacre’s dad do? He was a showbiz reporter for the Daily Express who got his boss Lord Beaverbrook to pull strings enabling him to avoid conscription. No wonder Dacre Jnr is such a coward and a cunt – it’s in his fucking genes.

Dacre is a nasty, dangerous authoritarian bully and to hear him – and the Mail – talking about upholding valued freedoms just makes me want to stab the sanctimonious cunt in the eye. Like Murdoch, Dacre is not interested in freedom at all, he is only interested in power – and the exercise of power with impunity.

So let’s take a quick look at the power Dacre currently enjoys: not only is he Editor of the Mail and Editor-in-Chief of the DMG Group, he has a controlling influence in the body that writes the Editors Code – which is odd since the Mail is the paper which most frequently transgresses that code. Why doesn’t the Mail ever receive any meaningful censure or sanction for doing so? Ah, that would be because Dacre is not only a controlling influence in the toothless Press Complaints Commission (recently rebranded as ‘IPSO’), but also a controlling influence in the body that funds the PCC/IPSO, so he is able to ensure that hardly any complaints against the Mail are ever investigated, let alone succeed. Is it any wonder that he and Murdoch have been shamelessly lying about how the Leveson recommendations equate to “state regulation of the Press akin to what goes on in Russia, Egypt and China” when in fact all that Leveson actually recommended was an independent body to oversee SELF-REGULATION by the Press itself to check that it was free from influence and interference by the likes of Dacre, Murdoch, et al? If there had been such rampant criminality in any other walk of life, the Mail would still be screaming for heads to roll at the very top of the organisation and for the immediate introduction of an independent regulator; yet when a decade of criminality within the tabloids is exposed, Dacre uses his paper to paint the Press as the hard-done-by victim. Yet more barefaced lies and nauseating hypocrisy.

And just when you thought no human being could possibly be any more of a hateful cunt, Dacre manages to go the extra mile – by hiring the universally despised Piers Morgan (cunted six times previously, sacked from three high-profile media jobs and now likely to face phone-hacking and perjury charges) to be the Mail’s U.S. Editor-at-Large. I’m sure cunters here will agree that no one throughout recorded history, no one currently living and no one yet to be born, however superficially cuntish they might initially seem, could ever match the all-encompassing, deeply contemptible cuntitude of Paul Dacre.

Dacre’s place in Is-A-Cunt history is secure: he is the most monstrous cunt on the planet and always will be, even when dead. For such is the infinite, transcendent scope of this cunt’s cuntitude that even when he is long gone and his stinking corpse lies rotting six feet under, just the distant memory of Paul Dacre will remain the very apogee of cuntitude in such a way that could never be equalled even if Stephen Fry, Piers Morgan, Rupert Murdoch, Gary Glitter, Max Clifford, Bono, Morrissey and every living politician were rolled into one.

If there were any justice in the world, Dacre would get the full Mussolini treatment immediately – ideally televised on huge screens in town squares and sports stadiums – and there would be three full days of national holiday for rejoicing and street parties throughout the land. In the absence of such a prospect however, I sincerely hope and pray that Dacre contracts a terminal illness very soon and dies slowly in excruciating agony. He should be buried in a public place where his grave can be easily desecrated and where his remains can be dug up each year on the anniversary of his death for lepers to shit on.

Failing that, Dacre’s home addresses – including his vast Scottish estate (Langwell Lodge) – can be found online. Now obviously it’s not my intention to incite violence… all I’m saying is, I’m sure there are cunters here who would gladly contribute to Flaxen Saxon’s air fare; but is there anyone who could arrange for a full BP tanker to be left for him in the car park at Heathrow with the keys in the ignition…? 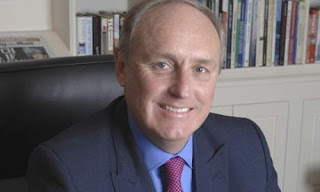 Paul Dacre is an offensive and hate-peddling obnoxious cunt.

Nominated by The Grim Reaper