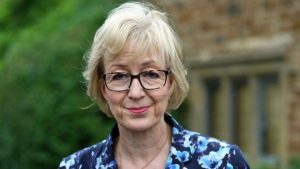 Turns out she was the one behind former Secretary of State for Defence, Sir Michael Fallon, being fired from his position yesterday.

He once put his arm around her. And on another occasion, quipped that, when she complained of having cold hands, “I know where you could put them to warm them up”.

That’s it. That’s all it takes, folks. A reputation ruined and a political career on the rocks. For that.

Fallon, in my opinion, is something of a cunt and not really that appealling to me as a Tory voter. I also think he is incompetent and very much disagree with some of the defence policies operating around cuts and associated. But no-one deserves to be dragged through the coals for that.

On the flipside, Julia Hartley-Brewer, when asked about a time when Fallon touched her knee, dismissed the incident as ‘laughable’. That, to me, is the proper reaction. As an aside I’m beginning to think that JHB is the perfect woman.

Leadsom of course has shown her opportunistic tendencies before, attempting a smash ‘n’ grab raid for Tory leadership in the wake of the pig fucker’s confusing departure. This cunt clearly will do anything to further her career and even worse, has helped prove that men don’t need to be given a fair hearing before a dismissal or punishment for an admittedly clumsy, but ultimately harmless crude remark.

I’ve had females in the workplace say far worse to me and others than that level of comment. Until the last few years, I thought nothing of it, but Leadsom, like so many others, constantly serves to remind us how damaging opportunistic cunts can be when they use the guise of sexual victimhood to apply to any unwanted attention.