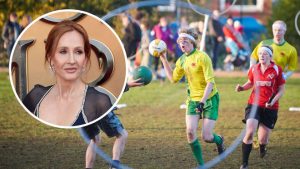 I want to cunt some massive cunts.

These particular cunts play a game called Quidditch which is based on a game played by the kids at hogwartz the fictional wizard school in the Harry Potter books.

These massive cunts play a fictional game based on flying wizards.

Obviously the spacca cunts cunt fly so run around with a broom between their legs as below.

Now as if that doesn’t mark them out as grade A cunts they want to change the name of the game to distance themselves from JK Rowling (the person who invented the fucking game for her children’s books) because she doesn’t buy deluded fantasy about men being women in real life.

Not content with being massive cunts running around playing a fictional game with a broom between their legs they now want to draw more attention to their cuntishness.

I suppose if you are ready to believe a man is a woman, imagining your flying around on a broomstick is not a big stretch.

And here’s one from Guzziguy

I know that the BBC is a regular subject on IsAC but there is a truly odd article on their Newsbeat section entitled ‘Can Quidditch thrive as Quadball?’
It would appear that the terminally sad freaks who run around green spaces with a broomstick between their legs wish to dissociate themselves from JK Rowling as she

had the temerity to point out that there are only two sexes.
It is hard to work out who are the bigger cunts, the outraged freaks or the BBC for thinking that any normal person would regard this stupidity as news.
As ever, I look to the technologically gifted on this site to provide the link. Thanks in advance.

Here it is in all it’s fucking stupidity.

84 thoughts on “Quidditch Identifies as Quadball”