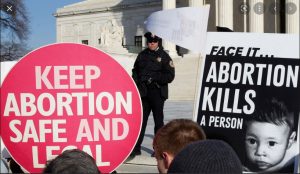 Contrasts sharply with the calm, considered legal Opinion of Samuel Alito that has been leaked.

I wish I could download it to the site but I cant.

Goes through how incredibly weak the original judgement for Roe was. How abortion is not mentioned in the Constitution. No legal precedent for the Decision.

A bit premature but I suspect the majority on here will be pro-choice. I did this before with my Humanist UK Nom asking the question –shouldn’t you be more careful of the company you keep?

Will this be the catalyst that will finally bring a second civil war to America? I have been thinking for a long time that’s the way they were headed.

And Miles does it again with this similar observation

Absolute zero awareness wishing each other ‘Happy Mother’s Day’ then straight onto Abortion. Not the slightest unease at all.

‘Margaret Brennan.  And we go now to the top Democrat in Congress, House Speaker Nancy Pelosi, who joins us this Mother’s Day from San Francisco.  Happy Mother’s Day to you, Madam Speaker.

Speaker Pelosi.  Thank you.  Happy Mother’s Day to you, Margaret.

Margaret Brennan.  Thank you.  And before we get to abortion, we did have….’

Something about the First Lady visiting Ukraine…it goes on…

was listening to Ben Shapiro about his thoughts on the Pro-Choice side. Said something like ‘they just ignore one side of the argument’. Namely of course the fetus.

Like another I heard when asked about ‘when life begins’ simply replied ‘oh, I’m not getting into that’.

We have Donald R. Trump to thank for getting these conservative justices onto the Supreme Court. That will be his greatest Legacy in my opinion.