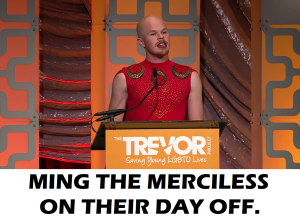 The Sleepy Joe Clown Show just keeps rolling on. A non-binary drag queen called Sam Brinton has just landed the role of ‘Deputy Assistant Secretary of Spent Fuel and Waste Disposition in the Office of Nuclear Energy for the Department of Energy’. Phew! Bit of mouthful Sam, and not for the first time either.

Sam’s colourful CV includes pup play, some kind of deviant fetish, I didn’t really want to Google it and lectures on ‘kink’ activism, eh? He is also part of a drag queen troupe who dress as nuns and campaign for alphabet peoples rights. Fuck me, he makes Keith Vaz snorting coke off rent boys arses look almost mundane.

I can see why Joe hired him, I mean someone who looks like they have been Lubboked in the broom cupboard by Philip Schofield for a week is an obvious choice to run the department that is responsible for the nations nuclear weapons programme and its reactors. The hopeless Kamel Toe Harris is the vice president purely on the basis of being a minority woman so why not.

When Donald Trump mentioned “Draining the swamp” back in 2016, I don’t think he expected Sam with his dog collar and cock ring to be the bottom.

News Link
(I for one welcome our new alien overlord – DA)

I tried to resist the temptation to cunt this freak but alas I can’t.
This is China Joe’s pick to oversee the disposal of nuclear waste.
There is so much cunt here to rant about:

The non-binary bullshit.
The weak ass parents acceptance of “them”.
The Daily Mail using the non binary pronouns to accommodate the cunt.
“Their” same sex “marriage”.
“Their” drag queen lifestlye.
“Their” choice of mustache with lipstick.
“Their” promotion to a no doubt good paying federal job and my tax dollars funding “their” wardrobe of drag.
This being a virtue signaling pick by Joe and nothing else.
The sad attempts at “conversion therapy” (useless).

I think this could well be what led Putin to realize he had nothing to fear from US if he invades whoever he wants.

And how do you trust “them” with this task of waste disposal to someone who doesn’t know that a waste pipe is supposed to be exit only?

Warning: Don’t have any beverage in your mouth when opening the link.