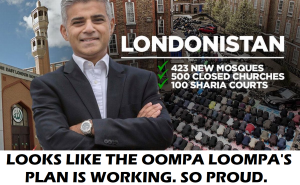 Let’s hear it again for that slimy little turd of a London Mayor – 5ft 4 inches of self righteous bile, – your own, your very own (and you can keep him) Sadiq “Concorde Nose” Khan, who has, yet again, attempted to blackmail the government, by pretending he is seriously thinking of closing down one of London’s underground (tube lines) OR axe “100 bus routes”, unless the government give them another (never to be repaid) “loan”:

I apologize to non-London cunters for raising this, but there is always this pattern with this little worm – he makes outrageous threats, gets the money he needs to piss against the wall, never tries to put his projects on a workable budget and then boasts that “he” has secured the funding – if he does, it is only through his constant blackmail.
(I think it’s obvious where the money goes. See header pic – NA)

And then there’s this from Sick of it

Another cunting for Suckdick and his Diversity is our strength shithole that is London.

A group of Jewish teenagers on a bus in Oxford St were ‘abused’ by several men, banging on the windows and giving Nazi salutes.
Now you would expect this was a ‘far right’ attack and if it had been them MSM would have had a fucking party with Tommy R hung drawn and quartered.

Sadly from the video footage this group of thugs had a familiar look, their heritage was either Stans or some other Muslim shithole

The link has the footage, and a headline ‘deeply disturbing’, not really it’s what we expect from the religion of peace.