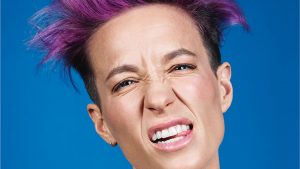 (Is she taking a shit in the header pic, or is she riding a strap-on cowboy style? – Day Admin)

Even in this country everyone knows about this purple haired, libtard, wokie, mouth almighty, know it all lezza fucking bitch.

In America she has managed to whip up a shitload of hatred with her constant whining about the terrible country she comes from and her disrespect for the American anthem and flag.

But it gets better. Apparently before Wokyo Arapaho appeared in an advert for Subway, kicking a football and knocking a burrito out of the hand of some cunt. Nobody thought it was raaaay-sist at the time but now she’s a fucking loser cunts are starting to ask questions.

Subway franchisees pay 4.5 % of their income to the corporation, some of which is spent on advertising. They ain’t happy with the Arapaho advertising and their customers are giving them stick about it. America is a harsh society……if you don’t come up with the money you are fucked. That’s just the way it is.

Nominated by – Freddie the Frog

Link helpfully supplied by – Dickie Dribbler (seriously do he post anything but links?)