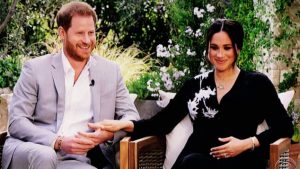 News is breaking that the Duke and Duchess of Netflix could be getting an award for their *a-hem* ‘bombshell’ interview with arch race-baiter Oprah ‘Wrighty in a wig’ Winfrey.
Crikey, the two-hour sob and whinge fest has only gotten itself a nomination for a bloody EMMY award in the (wait for it!) ‘Outstanding Hosted Non-fiction’ category. No, you read it right first time; that’s ‘NON-FICTION’ category!

Now in case any of you out there in IsACland aren’t aware, the EMMYs are handed out Stateside for ‘the achievement of excellence in the television industry’.
Bwa ha ha ha ha! Non-fiction; no fucking shit Sherlock!

You sometimes have to wonder whether our cousins across the pond are losing the plot. An award for a poorly-researched piece of schlock that’s been shown to be riddled with deceit and falsehoods which were left unchallenged throughout? You’ve got to be kidding.
Excellence my arse. The Emmys, just like the Oscars, have become nothing more than a sad joke.

Special Emmy for Harry and Meghan