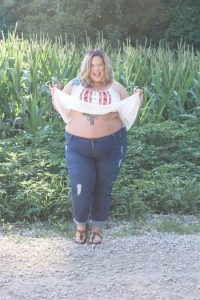 NA helpfully supplied this pic from his own collection. (psst speak quietly or you’ll wake him up)

(I have others too, nudge nudge wink wink say no more – NA)

Other people’s summer clothing is often a cunt.

Where are the fashion police when you need them?

The huge increase in morbidly obese cunts is particularly in evidence at seaside resorts, where they seem to think it is okay to expose their revolting stomachs, flabby arms, lard arses, veiny legs, and disgusting feet.

Some are so enormous that they move their elephantine bodies around on special motorised vehicles. However, and for balance I should say that skinny cunts can look appallingly wizened and warty.

It is a wonder that a yours truly, attired in a blazer, slacks, loafers and a straw fedora can hold down his lunch as he takes a postprandial stroll along the prom with Mrs Twenty.

I propose that, to end this annual horror show, the wearing following items of clothing in public, be banned:

T-shirts – (perhaps not an outright ban but at least they restricted item, available only to people of a sensible size);

Shorts – these disgusting items should be unavailable to men unless they are members of the forces serving overseas or in the Royal Navy (women’s shorts could be worn but again, on a restricted basis);

Sandals, slides and flip-flops – a ban for men except in a sports setting.

Nominated by – Twenty Thousand Cunts Under the Sea