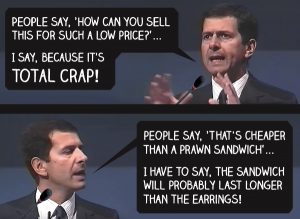 The younger cunters on these hallowed pages might not know what im on about, but a “Ratner” is a colloquial term for making an error of judgment named after Gerald Ratner, a low grade jeweller who made a joke that pretty much said he only sold cheap cràp,

My Ratner moment came 18 years ago at a family wedding here in Blighty where I asked my cousin who the “blik” gentlemen was, and was he doing Zulu dances for the entertainment,

She said no that’s my son in law, married to my other daughter,

Lady Quimson scuttled off for a fäg and left me high and fucking dry to get nasty looks and comments from some of the other guests,

I have yet to be invited to any other family weddings, but I hate that branch of the family so ain’t missing much,

Have any of my fellow cunters had a “Ratner” at any time, it would certainly make me feel less of a stupid cunt!