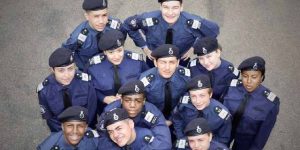 They cant win can they?
Racist one minute, deliberately letting a 19 year old black kill himself in the woods, taking the fucking knee and shouting ‘Free Palestine’ the next.

Cressida and Suckdick have turned them into a laughing stock.
Want to snarl up London? OK as long as you are Extinction Rebellion middle class lefty cunts.
Want a protest to turn violent? OK as long as it is in support of BLM, an anti capitalist, anti family, anti semitic bunch of savages with their trendy white middle class fellow travellers. The same fellow travellers probably who support the ER cunts.
Want to fly an insulting caricature of a democratically elected ally? No problem. It’s not hate crime is it? Like say misgendering a Geoff Capes lookalike in a frock.

The MET are cunts. Taking the knee, cheering on people who want to kill jews, they are cunts from top to bottom. Yesterday I walked past a 5ft 2 policeman with two 5ft police women. I laughed in their faces. Cunts.

And on a similar topic, this from CuntyMort

Sorry it’s the daily wail again fellow cunters. I just thought I would boil your Sunday piss by cunting this fucking object. The rozzers won’t discipline her because of the cunts who took a knee for burn loot and murder.

What the fuck, bring back the S.P.G. Wade in crack a few heads job done. To borrow a phrase this country is fucked.

…and yet more, thanks to Marvellous Mechanical Cunting Machine

Nowhere is the pernicious influence of the theory of structural racism more apparent than in the police. The police have swallowed this bogus theory hook, line and sinker. They have not thought the consequences through, understandably enough, as thinking has never been a strong point with the police.

If you accept structural racism the net effect is to conclude that certain groups – dark keys and mudslimes – have legitimate grievances and should be given a soft ride when they commit crimes. A genuine “get out of jail free” card.

This results in police officers policing such events in a genuinely supportive and compassionate way. We have seen this over the past week with the police officer who shouted “free Palestine” at a demonstration, effectively becoming one of the demonstrators. At a recent pro-Hamas rally attended by Steptoe and during which a gross anti-Semitic caricature was displayed, the police did nothing (which would not have been the case if the caricature was of a dark-key or a mudslime). This is because Jews are white and are not regarded as victims of structural racism.

I understand the middle-east creates strong views on both sides of the debate, but that’s no excuse for the police. For instance, a few weeks ago a group of mudslimes drove through Jewish areas of North London spouting anti-Semitic abuse and threatening to rape Jewish women. The police let this happen until they revived a barrage of complaints and were shamed into making arrests. The funny thing about these mudslime racists and advocates of rape is that when they drove through London on their hate spree they obeyed the traffic laws and stopped at red lights. Why is that? Because they knew that if they broke the traffic laws they would be prosecuted whereas, because they are victims of bogus structural racism, they could commit hate crimes with impunity and the police would allow them to do it. And they were right – on the night in question plod did bugger all.

The police are telling mudslime and dark-key criminals that they are in charge. Just as they told the Stinky Rebellion that they supported their law braking and are happy to take the knee to Bleks Love Mansions. Just as they took no action when young mudslime thugs threatened to kill a teacher when he showed cartoons of Mohammad or “students” at the Pimlicunt “Academy” rioted and burned the British flag. The police have accepted that they are oppressing minorities by enforcing the law. ‘It’s structal waycism, innit”?

The principle that all are equal before the law has been undermined- by the police!

A real pile of cunt.

97 thoughts on “The Metropolitan Police (3)”