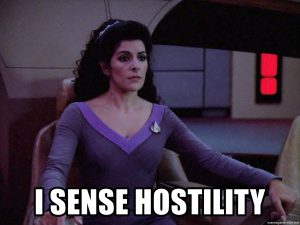 Marina Sirtis, needs a nomination. The former Star Trek: The Next Generation has long been known for her lefty views, and this time she’s set her sights for her dipshit views on the state of Texas. And as someone who’s dad is from San Antonio, Texas, and was born and spent his first nine years there, I’m taking this personally. After the storms, power and water outages and over 20 people dead, Sirtis thought it entirely appropriate to Tweet:

“Don’t get me wrong, my heart bleeds for what Texans are going through right now but the mean girl in me says you get the government you deserve and they have voted Republican, across the board, for the last 20 years. #Betoforgovernor.”

There’s nothing but mean girl in this far left slag. Like I said, over 20 people have died, yet this is what the smug, self-important Patrick Stewart with tits thought would be appropriate to tweet. ‘Well, you voted Republican, so you DESERVE to have these storms. The people who lost their lives DESERVED TO DIE’.

Fuck you, bitch. This is typical far left bullshit, from someone who considers to be far more important than she actually is. And ‘Beto for governor? Robert O’Rourke? That 47 year old flaccid dildo, who is the son in law of the richest man in Texas man in Texas? Who thinks he’ll get the youth vote by being filmed riding on a skateboard? Who thinks that, despite his clearly Irish heritage, will also get the Latin vote if he uses the Hispanic ‘Beto’ instead of Robert? Incidentally, Beto is a name used by those in the Latin community as a short form for names that end with Bert or Berto. It would be considered racist or cultural appropriation if he were anything other than a democratic.

Why can’t the left understand that people are free to vote for whoever the fuck they want? And why do ‘celebrities’ like Sirtis feel it’s ok to make shitty remarks like this after a major storm, especially one that has killed people? She’s a fucking cunt.

(Famous on ST:NG for her “I’m sensing something, Captain!” – Shakespeare it ain’t – DA)