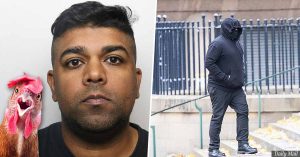 Have you ever pondered the question ‘why did the chicken cross the road?’. Well in Bradford at least, it may be to avoid the unwelcome attentions of a certain ethnically persuaded individual by the name of Rehan Baig.

There was also film of the gruesome twosome ‘romping’ (as ‘The Stun’ might put it) with a dog. The images were stored on computer under ‘family vids’.

Baig has now been sent down (or as ‘The Stun’ might again put it, ‘Sex Beast Caged’) and put on the sex offenders’ register. Although the films suggested that Mrs B had been a willing participant, she of course claimed ‘domestic abuse’ and got off with a suspended sentence.

Blimey, I’d like to be a fly on the wall of the prison canteen, and can envisage a conversation something like this;

‘Basher Bloggs’; ‘wot yer in fer mate?’
Baig; ‘I am being here for possession of naughty kiddy images. And for having sexy fun with chickens and a dog’
‘Basher’; ‘fook me, did ya put ’em in’t curry after?. Right lads, ‘old this cunt down, an’ I’ll kick his fookin’ ribs in’

It’s really hard to fathom what makes people act the cunt like this. Part of a certain cultural heritage perhaps? Anyway, it’s clucking fowl is what it is.

and seconded by: mystic maven

A KFC bargain bucket cunting for Rehan Baig, recently sentenced to three years for having sex with chickens, yes.

Not much more I can say here, so read the story for yourselves. His wife’s a cunt too for assisting him with his perversions.

Rehan Baig. Aged 37and his wife Haleema.
Often I am overly Verbose when writing things however, this is one time that words are really failing me.

This piece of scum has been sentence for raping poultry to death while his dear wife filmed it. What the Fucking fuck fuck.
Other misdemeanours include sex with a dog and a catalogue of child pornographic pictures.
See link https://www.opindia.com/2020/10/uk-37-year-old-paedophile-named-rehan-baig-jailed-for-raping-chickens-to-death-while-his-wife-filmed-it/

He received 3 years inside at Bradford crown court she 6 months suspended. ( She claimed, possibly true? that he abused her)

WTFFF. I here by pass a new sentence that he attends all of Barrymore’s future pool parties. For a very long time. Fucking depraved Cunt.

(A bonus nom for Saturday evening, just to put you in a good (or fowl, ha!) mood for when you tuck into your Sunday Dinner of Roast Chicken & Rehan Baig stuffing. – DA)