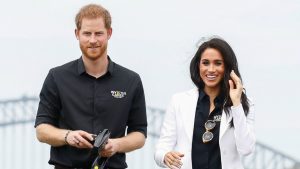 It gives me no pleasure at all to offer the Duke of Sussex up for execration yet again. What has the cunt done now? I hear you ask. A deal with Netflix. We know, I hear you say, scornfully. Old news.

No, cunters, this is the follow-through to that diplomatic fart. He’s shat on the Invictus Games, the only thing that actually justifies the cunts existence, though not his avarice. Apparently the Games were to have been shown on Amazon, and Netflix told him to withdraw his support. And he did, the pussywhipped nomark. What a cunt.

(Originally a Times (paywall) article, confirmed . However, it is now the subject of a legal complaint by Sue Grabbitt and Runne for the Duke of Cunts. Guess the legal profession’s falling over itself for those two )

..and seconded by General Cuntster (Deceased)

Let’s get right to it:

In short; they got the big bucks and the wounded soldiers got dick. Bravo, you pussy whipped, formally royal cunt.

In a statement issued today Mr. Markle-Hewitt announced he was making a “donation” to the Sovereign Grant. Another sycophant went on to say:

“This contribution as originally offered by Prince Harry has fully covered the necessary renovation costs of Frogmore Cottage, a property of Her Majesty the Queen, and will remain the UK residence of the Duke and his family.”

(How many things can you find wrong with that statement?)

“Harry made very clear from the start that he wanted to repay that money because he felt that if he handed it back then no-one would have the right to control him.”

(Sources and quotes taken from The Daily Mail.com, PageSix, Vanity Fair, and Town and Country.)