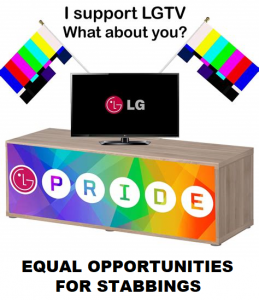 LGTV equal rights, be careful what you wish for, this may be premature but it looks like the Birmingham stabbings where centered in the Birmingham gay village, so by waving flags and acting like cunts you invite nutters with knives who want to harm you.
Also the police are saying lots of people in Birmingham look like the stabber(excuse the pun) so this means an ethnic group who like to stab each other (with knives no pun intended) so it may not be the usual muzzy terrorist its a new type of gay bashing, so the lgtv group have put themselves back to the 80,s same as BLM, so well done equal rights you wanted, it appears that’s what you’ve got……enjoy cunts!