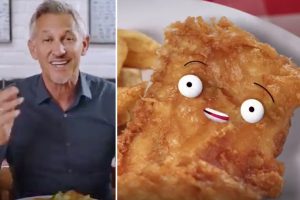 I’d like to cunt this goat-jugged stroker, please. This cunt is paid over one and a half million of Her Majesty’s Finest British Pounds for hosting Match Of The Day. Under two hours a fucking week. The idle gobshite doesn’t even host Match Of The Day 2 on a Sunday. The BBC shoehorn a token wimmin into that, usually Gabby ‘Mrs Punch’ Logan. So, for under two hours a fucking week and the odd international game, this big-eared, goatee-bearded parasite pulls in more loot a fucking year than the entire staff of my ambulance station. With the bunce this cunt is on, he should be presenting ANYTHING to do with football. Anything.

….and a belated follow up by Freddie the Frog

Has anyone seen his latest “fish and chips” video?
Unfortunately I don’t have the technical competence to post it myself but there are plenty of cunts on here that do.

Just take a look at it…….it requires no comment from me. You be the judge.

Yes, I dare any of you to watch his latest video claiming that Fish and Chips wouldn’t exist if it wasn’t for refugees. First off, he’s wrong. The bloke was a honky (if it was him) who was a legal immigrant from France, not an illegal African taking his chances on a dingy for benefits. The first chippy may have opened elsewher (in Lancs), but he didn’t mention that.

Basically, he uses the post modern/deconstructionalist bullshit approach to break things down until they are nothing (for whitey/Britain). I reckon he’s dong this as he’s kiss arsing his woke employers, the BBC.

I can deconstruct that lions are the same as apples using this approach (go back to the big bang and we come from cosmic dust etc). It’s absolute bollocks.

I hear he’s taking in an invader. I bet he fucking doesn’t unless they’re carefuly vetted. I hope he gets an non vetted psychotic extremist who shits on his bed, ties him up, opens his arsehole to new levels and robs him blind, the bellend.

Another cunt trying to belittle the achievements of Britain. A traitor.