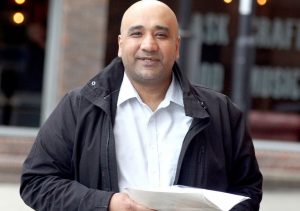 Not white? Not newsworthy

Harjit Singh Bariana is a cunt, isn’t he.

An owner of a chip shop and pizza takeaway in Sunderland has been imprisoned for six modern slavery offences. This swarthy rat “targeted white men who were left homeless due to alcoholism and drug addiction.” His victims were five British men and one Dooshka who were forced to live in “horrendous conditions” and work 13-hour days, including cleaning sewage pipes by hand. When he wasn’t beating them, he plied them with booze and leftovers whilst taking their benefit money.

“No one chains a slave without chaining himself” said the horribly ungrateful Mahatma Gandhi. In a way, the treacherous, little cunt was correct, as Bariana was jailed for eight and a half years, though will probably be out in four.

If it’d been a cracker enslaving darkíes and a Dooshka, MSM would’ve been on this more quickly than the Flabbotadaurus on a Nando’s waste bin, yet it’s been largely ignored. It seems ‘people of colour’ enslaving Whitey just doesn’t exist.