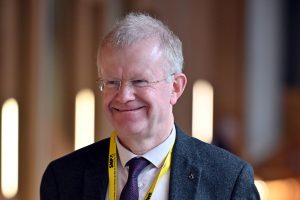 John Mason is a cunt, isn’t he?

As if being an SNP MP isn’t loopy enough, this wingnut has condemned a church for cancelling services amid the Chinavirus pandemic. With thousands infected and the death toll at over 200, Mason said, “Surely we should be bold, take risks, and trust in Jesus?”

Well John, I would ask you why your God allowed the virus in the first place? Why create people if only to torture them with pestilence, disability, cancer, disease, etc, especially in children?

Mason has also said that Creationism should be taught in schools as an alternative theory to evolution. Furthermore, he has also criticised gay people saying, “The Bible’s teaching is that a follower of Jesus should not have a sexual relationship with someone of the same sex.” In fact, he’s so anti-homo, it’s almost as if he’s hiding something.

This is the same wacko cunt who compared the IRA, that murdered three Scottish soldiers, to “freedom fighters” then initially refused to withdraw his comments. Even arch Britain-hater Nicola Sturgeon thought that was off and apologised on his behalf.

Mason is a fruitnut. He recently wrote, “I believe that the Bible is the word of God and its teachings are God’s direction as to how I should live my life.” Presumably that includes Noah’s Ark, parted seas, talking snakes, voices in his head, desert shrubs suddenly alighting, people turning into salt, and all of Jesus’s Magic Circle sleight of hand tricks.

God wasn’t available for comment as he doesn’t exist.